The Sashimi Bar in Bozeman Montana is truly Extraordinary

Last night we finally made our way to The Sashimi Bar in Bozeman and we now regret not having gone sooner. We have been to Dave’s Sushi in Bozeman many times, and always rave about the quality of their fish, but this is a whole other level of excellence.

The Sashimi bar accommodates 12 people for their omakase menu, in two different seatings- one at 5:30 and one at 8. We grabbed seats for the earlier. There are also tables for diners who want to order off a small menu, but the omakase is the way to go, it is part epic dining experience, part theater and part club experience (the playlist is terrific). Priced at  $100 per person, the omakase menu is without a doubt the best bargain in town.  Located just off Main Street in Bozeman, there are no signs aside from this large and imposing door to indicate you are in the right place.  Once you open up that door, you find yourself in something of an alternate universe (a very special one!)

The decor is most certainly Montana inspired, but there is a slight twist, and this remains consistent throughout the evening’s dining experience.

The greeting by the Sashimi Bar staff is warm and welcoming. We were seated at the end of the bar, just next to Lance, one of the two Sushi Masters (the other being Paul).  I am not sure whether in a past life they had been part of a rock band, but if they were, I wouldn’t be surprised.

There is a small yet very appealing drinks list, and the bartender is very knowledgable about all the offerings.

We ordered some unfiltered Sake as well as a beer made with wld yeast. 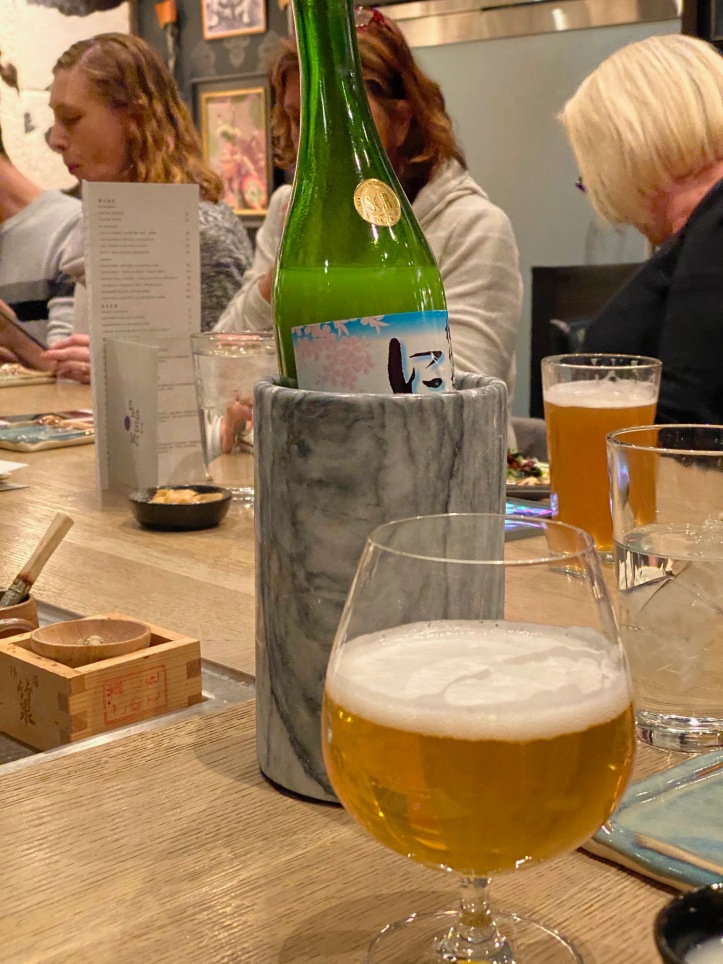 I enjoyed the “Bartender’s Choice” Mocktail which was delicious.

Trusting the chefs is the key to a successful omakase, and after we settled in, we put ourselves completely in their hands.  There were at least 20 courses of incredibly fresh and impeccably prepared sushi, sashimi as well as a couple of hot dishes from the kitchen.

The fish is flown in every other day from Japan and/or Hawaii, and the restaurant is open every night of the week aside from Mondays. Rather than take notes, I relied on my camera to record the impressive parade of dishes, and just enjoyed myself.

Consideration is paid to absolutely every detail, including the pottery created specifically for different courses.  As a first taste, the cucumber salad was bracingly refreshing.

Every sense is entertained during the evening, with each course presented as gift.

The care and attention paid to the fish by Chef Lance was remarkable. 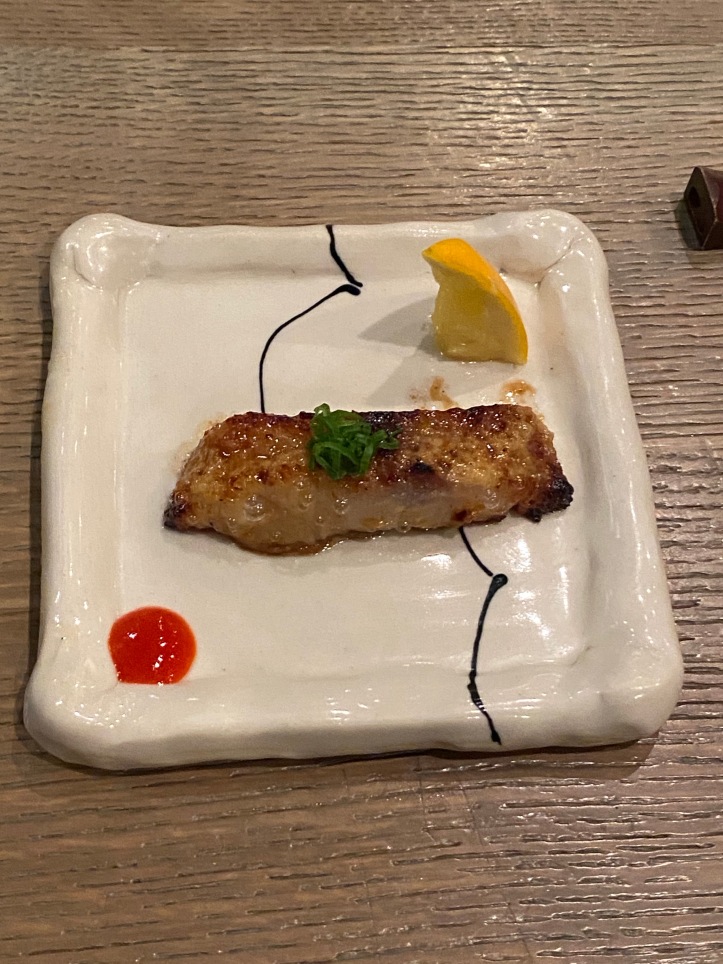 My husband is allergic to oysters, so my son and I got to share his portion!  They were smoky and delicious.

Each offering was more delectable than the last.  Throughout the meal there was much interaction between diners and chefs.  Many of the people there were repeat customers, and the atmosphere is very congenial.

The spicy octopus with strained yogurt was out of this world. 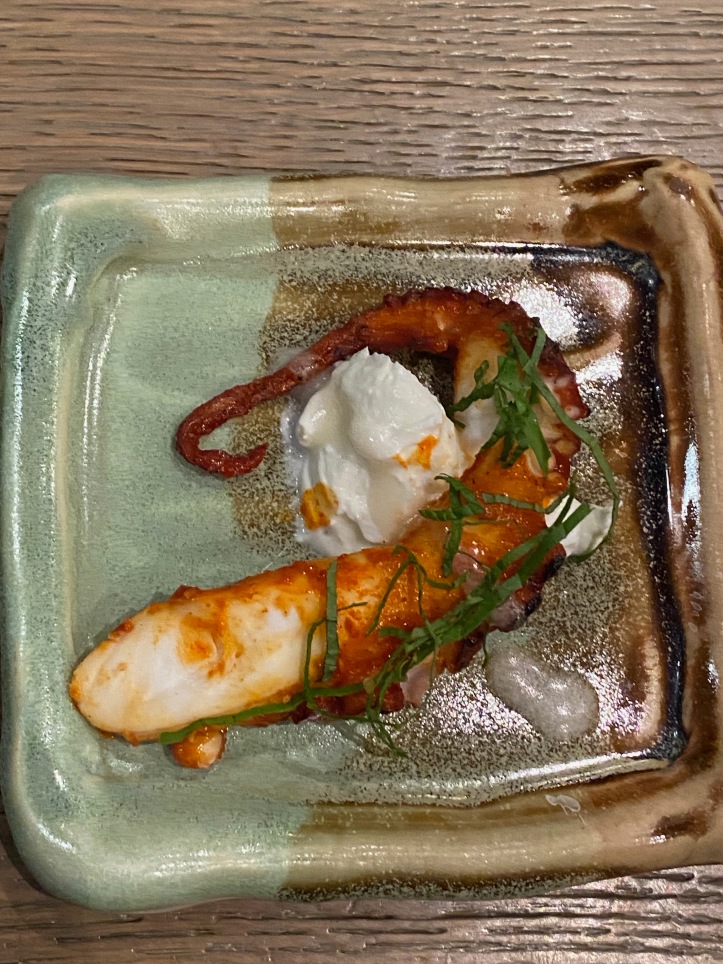 Watching the chefs work alongside one another was mesmerizing. 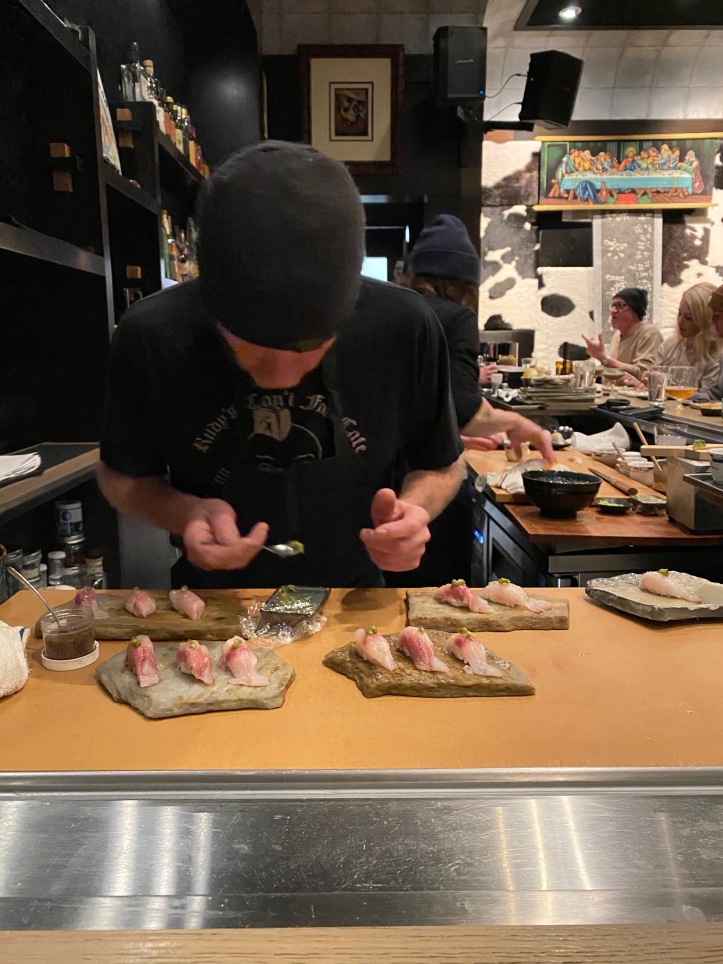 Much of the sushi was topped with innovative salt/spice mixtures which made for completely new taste sensations.

The quality of the fish was just outstanding.

Watching Lance prepare the geoduck was very unique.  It needed a bit more attention than some of the other fish. 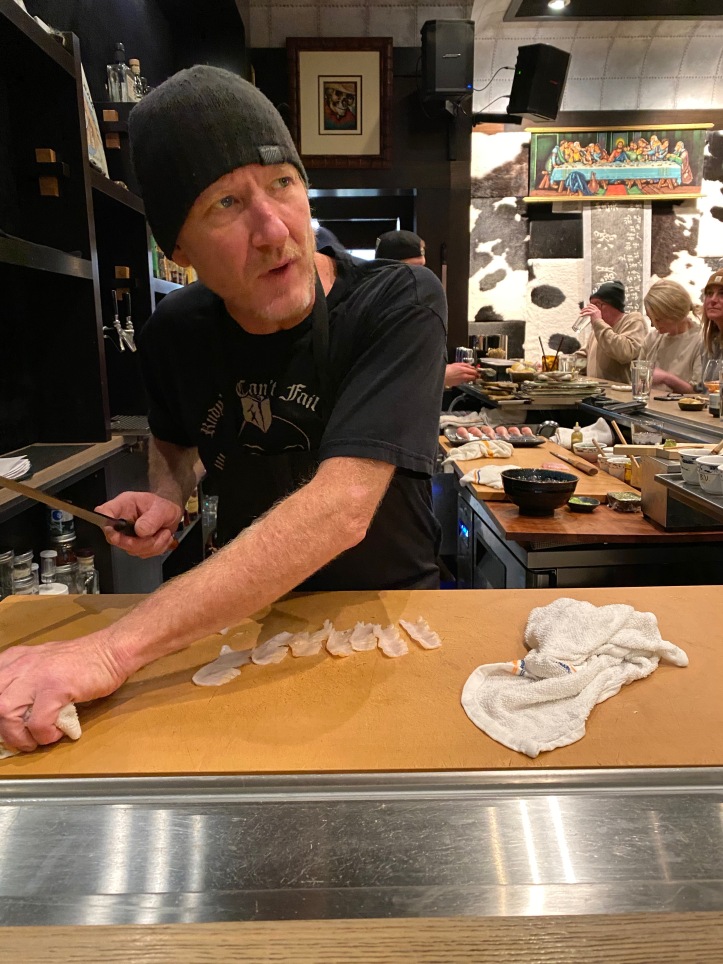 The geoduck (giant clam) once sliced was thrown on the counter to make it seize up a bit, and grip the seasoned rice more securely. 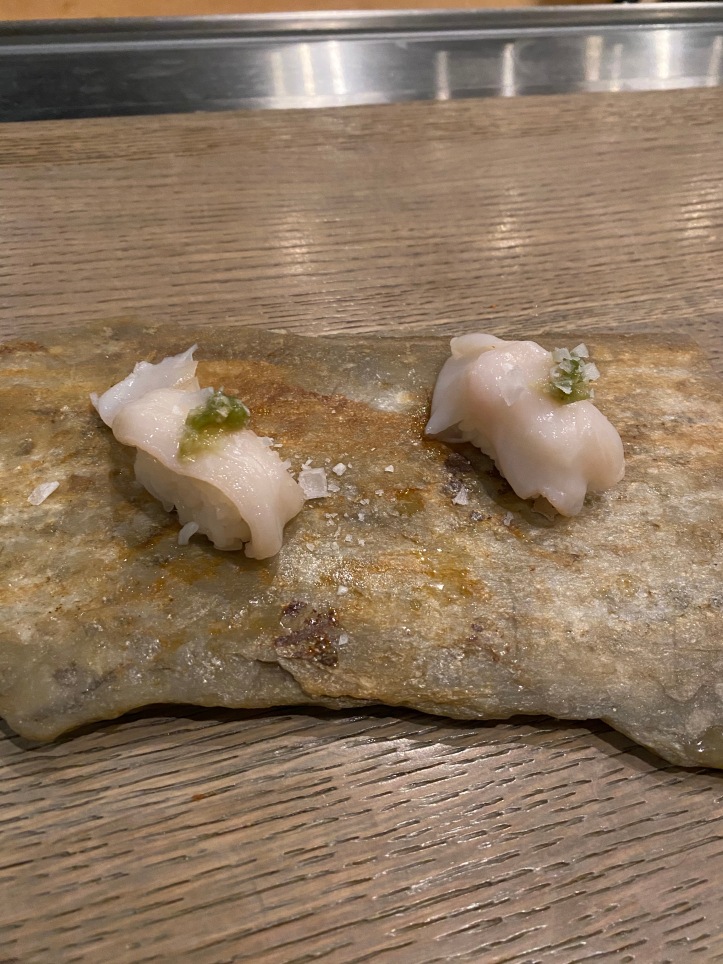 Even the caviar and blinis had a subtle twist from the expected.

The nori chip topped with chopped whitefish was perfectly fried. 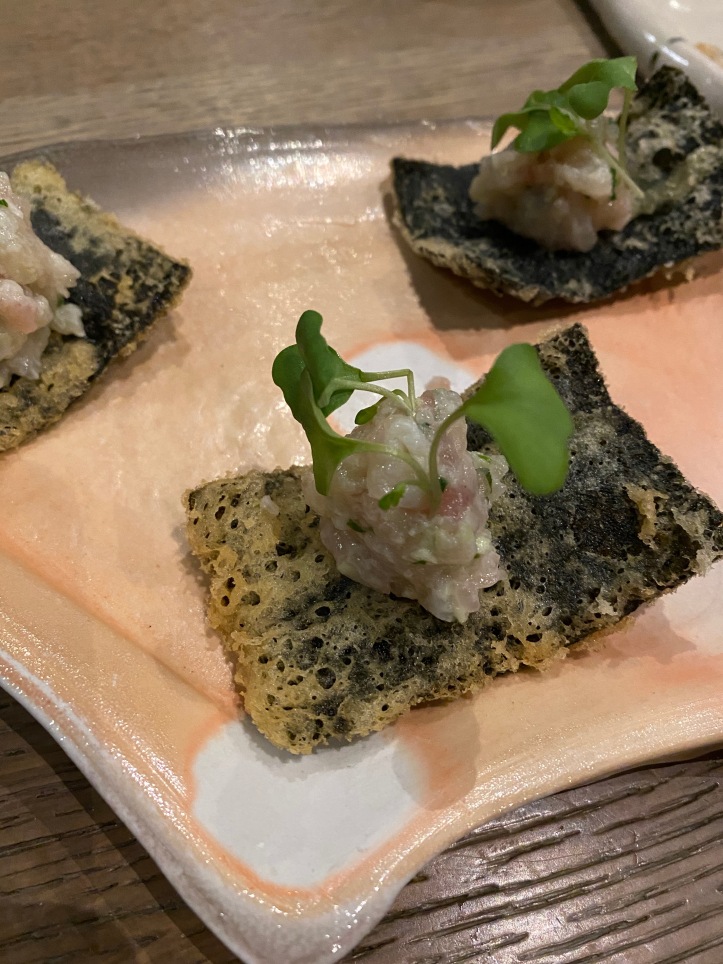 Honestly, I completely lost track of what fish was being served to me, but since the menu changes from day to day depending on what is freshest, the offerings may be entirely different when you decide to pay them a visit.

The ceviche with homemade sweet potato chips was a bit of a cultural curve ball, but so yummy.

The one dish I had some trepidation about was the eel, but that is my own personal issue.  I know it is not a snake, but it looks too much like one for my comfort.  I have always avoided it, but promised Lance I would try it.

I had confidence that if I ever was going to like it, it would be at The Sashimi Bar.  After one bite, I determined I couldn’t get  beyond the snake visualization, but both my husband and son deemed it their favorite course, so there you go. 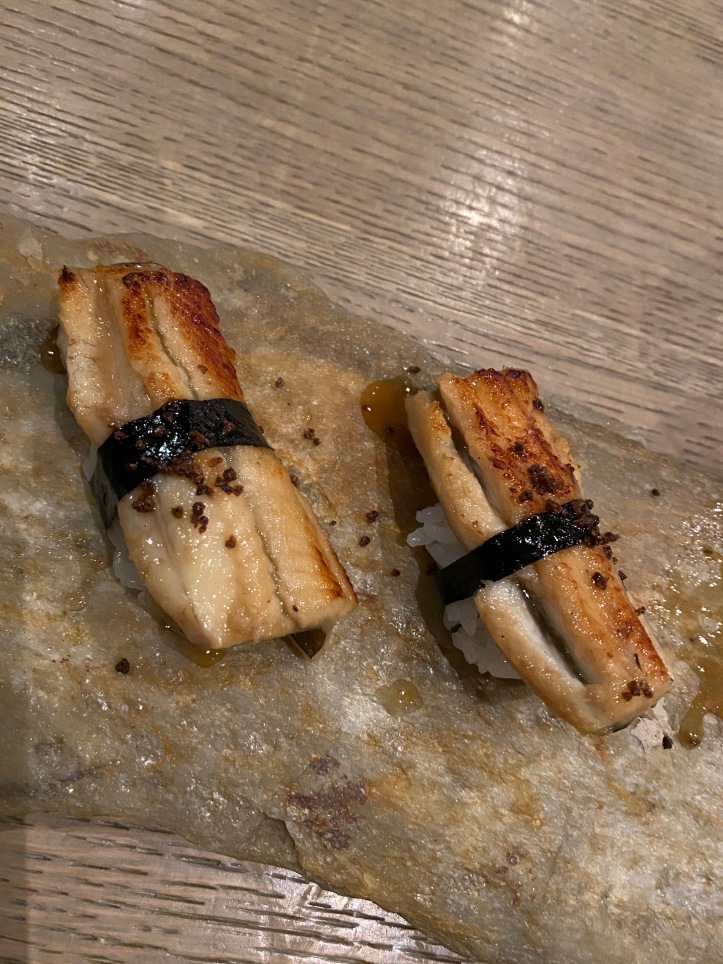 A savory bowl of miso soup came out near the end of the meal.

Here is Chef Paul in action, expertly torching one of our last offerings.

Last but not least, homemade uni ice cream, which was way better than you might expect.

As we were preparing to go, we couldn’t resist buying a sweatshirt as a memento of our incredible evening.

Both my husband and son advised me to not post a review, fearful that The Sashimi Bar would quickly be overrun with patrons, and somehow lose its quirky charm, becoming mainstream.  I don’t think there is a danger of that, so I am sharing this write-up.  To my Montana friends, I am up for returning anytime, so if you decide to go, let me know, and I will try to join you.  We began 2020 with this incredible meal, and I expect it will be a hard one to top!